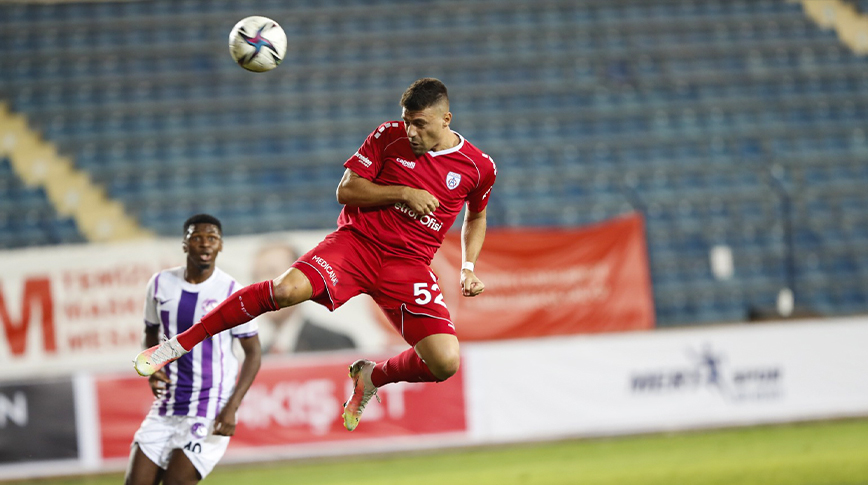 Altınordu started the new season with the away game against Ankara Keçiörengücü. The tight race between the two teams at the Osmanlı Stadium ended in a draw with a score of 1-1.

min. 1 In the first minute of the match, Keçiörengücü team player Talha crossed the ball from the left wing in our penalty area and the ball that Vusal could not touch went out.

min. 4 Our player Emircan crossed the ball from the left wing, bounced off the opposing team Mehmet Tayfun Dingil and returned from the post.

min. 8 Uğur Ultu from midfield sent the ball to goalkeeper Eray İşcan. Ahmet İlhan's pressure gave results when Eray kept the ball on his feet too much. The ball that Eray tried to move away remained in front of Emircan. Then Keçiörengücü goalkeeper Eray saved the shot of our player Emircan. He turned the ball, which remained in front of Emircan again, from the left side of the penalty area to six passes. The ball in the middle of the resulting carrom was directed to the goal with the intervention of Keçiörengücü defense. They managed to keep the ball in the game with the intervention made on the line.

min. 14 Ali Dere and Burak İnce hit the ball from the penalty spot and slapped him and went into the corner.

min. 23 Our player Ahmet İlhan won in the midfield and sent the ball towards Ahmet Dereli's running track, and goalkeeper Eray İşcan left his castle and got possession of the ball.

min. 38 Our goalkeeper Ali Emre Yener slammed into the corner with a hard shot from Burak Ogun's arrival in Keçiörengücü, which is far from the penalty area.

min. 41 Our player Sami sent the ball to Burak İnce, Burak centered the penalty area. Eray had the ball before Emircan. After this position, goalkeeper Eray had an injury after colliding with Emircan. The game resumed after a short pause.

min. 45+1 Goalkeeper Eray missed the ball while trying to score and touched it outside the penalty area. The referee of the match awarded a free kick. The free kick we used with Burak İnce hit Keçiörengücü player Uğur, who was on the dam. After the injury after the position, the referee blew the last whistle of the first half.

min. 48 Our player Yusuf Yalçın Arslan sent a long ball, and Ahmet İlhan Özek hit the ball in his face uncontrollably after the blow he received from behind. After a short pause, the game resumed.

min. 56 Our player Ahmet Dereli sent the right pass to Ahmet İlhan. After Ahmet İlhan, who had the ball, entered the penalty area, he remained on the ground with the intervention of the opponent defender Fatih, and then the game continued.

min. 65 Recep Aydın and Ahmet İlhan passed the free kick we won after the foul against Burak İnce, but then the ball remained in Keçiörengücü.

min. 67 In Keçiörengücü, in the middle made by Talha Yünkuş by descending to the left last line, Sami helped our defense and interrupted the attack with a head shot.

min. 68 In the middle of Talha, who was carrying the ball from the left wing, the ball went out when Eze made a shot over the six-pass.

min. 72 While our player Burak İnce was dribbling the ball from our own half, as soon as he passed the midfield, his opponent Uğur Utlu intervened from behind, and the referee showed Uğur his yellow card.

min. 74 Hamza Gür, who won the ball we lost on the attack, threw his pass in front of Eze, who was running on the right wing. Faced with our goalkeeper, Eze sent the ball to Issa, who came in from the left wing, and Issa sent the ball into our nets and scored the goal that put his team ahead 1-0.

min. 82 Burak Aydın took the ball that we lost while leaving the midfield and forwarded it to the back of the defense. Keçiörengücü player Issa, who met the ball, sent the ball out from the left in the position facing our goalkeeper Ali Emre.

min. 85. Enis Destan, who met the ball with Yusuf Can Esendemir's head pass, dragged the ball into the goal without entering the penalty area, and the shot went right from the side of the goal.

min. 89. In Keçiörengücü, Mehmet took the throw-in in front of Eze. Eze, who got away from Yusuf Can and faced our goalkeeper Ali Emre, sent the ball outside.

min. After our 90+3 Player Muzaffer Kocaer sent six passes from outside the opponent's penalty area, Hüsamettin Yener's head shot up in the middle, and the ball went into the net and we equalized the score. 1-1